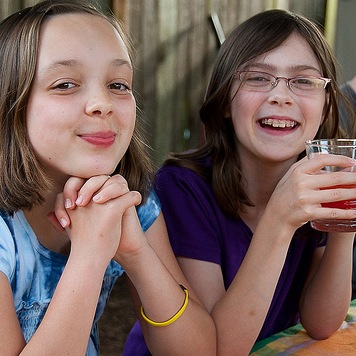 “What about socialization?” The question often brings up unpleasant associations for homeschoolers—being judged for their lifestyle by a teacher or a doctor; a social worker threatening to break up the family. It is such a loaded question that quite a few homeschooling resources mention socialization specifically to reassure homeschoolers that it’s not something to worry about and that their critics are just misguided or ignorant.

But what does anyone really mean by ‘socialization’? According to the Home School Legal Defense Association’s analysis of the topic, socialization means

This understanding of socialization, however, is incomplete.

Socialization, as understood by social scientists,[1] is defined as “the process by which individuals acquire the knowledge, skills, and character traits that enable them to participate as effective members of groups and society” (p. 6). That is, socialization is not something that you seek in and of itself. Instead, it is a set of opportunities for you to learn a number of useful skills. “Gosh, I feel really isolated, I need more socialization” doesn’t make sense according to this definition. If anything, you ought to say “I think I will need to know how to ____ to be an effective member of society, but I haven’t had enough opportunities to learn this skill. I need to spend more time in a social environment that fosters this skill in me.”

Socialization occurs everywhere, in every interaction with people. In the family, the child’s primary agent of socialization, he or she gains a status and a cultural heritage. Children develop patterns for establishing relationships and learn to model desirable behaviors and initiate activities. In the peer group, children gain experience in independence and egalitarian relationships and gain a sense of who they are by comparison with others. They also learn cooperation and role taking. In the community, children broaden their range of experiences and gain different perspectives on life, taking on new statuses or roles (p. 44-51).

A person can be said to be well-socialized if she has successfully learned a sense of self-concept, the ability to self-regulate, the drive to accomplish things, the performance of social roles, and culturally-specific developmental skills (p. 36-43). These aims of socialization are further described below.

“Self-concept is an individual’s perception of his or her identity as distinct from that of others. It emerges from experiences of separateness from others. The value one places on that identity [is] self-esteem. … A self-concept develops when the attitudes and expectations of significant others with whom one interacts are incorporated into one’s personality” (p. 36-37). Critical elements of self-concept developed during childhood and early adulthood include: a sense of trust in oneself and other people; a sense of autonomy and the development of a will; a feeling of initiative to try new things and ask questions; the capacity to enjoy work; the ability to explore choices and make commitments; and the ability to establish intimacy. Elements of self-concept critical to adulthood and later life are a sense of generativity or productivity—the desire to make a lasting impact on the world—and a sense of acceptance of responsibility for one’s life.

“Self-regulation involves the ability to control one’s impulses, behavior, and/or emotions until an appropriate time, place, or object is available for expression. This can be interpreted as routing our feelings through our brains before acting on them according to the situation. Regulated behavior often involves postponing or modifying immediate gratification for the sake of a future goal. This implies being able to tolerate frustration. … As children develop cognitively and have more real experiences, they learn how to interpret events and how to express emotions appropriately. They develop strategies for coping with disappointment, frustration, rejection, and anger” (p. 40-41).

“Socialization furnishes goals for what you are going to be when you become an adult …These goals provide the rationale for [following society’s rules and give] meaning or purpose to adulthood and to the long process a child has to go through to get there” (p. 41). Important skills include the motivation to achieve and the ability to explain success or failure.

“In order to be part of a group, one has to have a function that complements the group. … We have many social roles throughout life, some of which occur simultaneously” (p. 41); for instance, many people take on the social roles of child, sibling, partner, parent, friend, and worker at some point in their lives.

“Socialization aims to provide social, emotional, and cognitive skills to children so that they can function successfully in society” (p. 41). These skills depend on the culture of the society. In 21st-century North America, social skills like how to obtain information from other people, use the telephone and the internet, and make small talk might be important to learn. “Emotional skills may involve controlling aggressive impulses, learning to deal with frustration by substituting another goal for one that is blocked, or being able to compensate for mistakes. Cognitive skills may include reading, mathematics, writing, problem solving,” etc. (p. 42).

Eventually, socialization results in the development of values (“qualities or beliefs that are viewed as desirable or important”), attitudes (“tendencies to respond positively or negatively to certain [stimuli]”), and morals (“evaluations of what is right and wrong”) (p. 67-68).

If a social scientist says  a child is “not well-socialized,” what she means is that he lacks some age-appropriate skill which he will find necessary to be an effective member of society. It is not a judgment about conformity to others’ expectations—rather, it is a sympathetic assessment of someone’s ability to accomplish what he wants to accomplish in his life.[2] For instance, if he lacks a sense of trust, it might be hard for him to establish intimate relationships. If he lacks the ability to self-regulate, he might have anger management issues. If he lacks the motivation to succeed, it might be hard for him to find and keep a job.

Socialization is extremely important to children’s well-being. Homeschool parents should devote serious effort to understanding what is involved in socialization and making sure their children receive the socialization they need to succeed in life.

[1] This discussion of socialization is drawn from Child, family, school, community: Socialization and support, 9th ed., a 2013 textbook on socialization written by Roberta M. Berns, an emerita professor in the Psychology and Social Behavior Department at the University of California-Irvine (Belmont, CA: Wadsworth, Cengage Learning).

[2] “In light of homeschool advocates’ criticism of institutional schooling’s socialization efforts, it bears mention that asking, ‘Do homeschooled children acquire the necessary social skills to function effectively in broader society?’ does not mean homeschoolers (or anyone else) must mimic the behavior and customs of the wider culture. Rather, the relevant question is whether children gain the social fluency to navigate that context, learning how to develop relationships and work effectively with others.” (Kunzman & Gaither 2013: 19).