Click here to view this document as a pdf.

Virginia is the only US state that allows parents to bypass compulsory education laws by claiming a religious exemption from school attendance, according to the University of Virginia School of Law’s Child Advocacy Clinic. One of the publications cited in support of the religious exemption is Brian Ray’s 1994 study entitled “A brief statistical analysis of academic achievement test data from home educated students operating under the Virginia religious exemption statute.” This study, which contains only one page of analysis accompanied by seven pages of tables, was not published in a peer-reviewed publication—it was released by Ray’s National Home Education Research Institute (NHERI), essentially a vanity press which operates in practice as the research arm of the Home School Legal Defense Association (HSLDA). It is highly unlikely the study would have been published as-is in a peer-reviewed journal, as it appears to be merely a stub of an article, lacking complete analysis and any description of methodology.

Ray’s study does not prove that religiously exempt homeschoolers in Virginia score 33% higher on standardized tests than public schoolers, although it has been claimed to do so. It does demonstrate that a small percentage (around 9%) of the state’s religiously exempt homeschoolers in 1994 were doing well academically; that they scored better on reading than math across the board; and that their math skills decreased with respect to public schoolers as they aged, while their language skills increased.

However, these homeschoolers were not randomly selected and most likely included the most academically successful religiously exempt students in the state. Ray did not collect information on or correct for demographic factors which have been shown to affect academic success, such as race, family income, family structure, parental education, etc. Furthermore, the participants in Ray’s study were overwhelmingly elementary schoolers—the number of older children sampled was so small as to be meaningless—and were probably drawn from suburban areas of the state, as these were the primary locations of religiously exempt homeschoolers in 1994. Today, the landscape has changed somewhat—the number of religious exemptions has more than tripled, and religious exemptions are now most common in extremely rural areas. Whatever little descriptive validity Ray’s study had in 1994, it is now no longer relevant.

In the sections that follow, I will first give some background of the study, then outline its major points. Next I will provide a critical analysis of the study, and finally I will summarize what his results actually mean.

[expand title=”Background of the study”]

Ray released the results of the study in January 1994, but the standardized tests he analyzed were conducted during one of three years (1991, 1992, or 1993); it is possible some participants were tested several times over multiple years, though the majority of tests analyzed (184) were administered in 1993.

Ray states that he analyzed the standardized test scores of 213 Virginia students educated under the religious exemption law; however, this is misleading for several reasons. First, when he reports his data arranged by grade, the numbers he offers add up to 156, not 213. Second, while he may have had access to 213 test scores, he did not have demographic data for every participant. According to Ray, only 181 participants reported their grade, 152 reported their age, 184 reported their gender, and 197 reported the year they had taken the standardized test. It is unknown how many test scores were associated with a fully complete demographic survey. 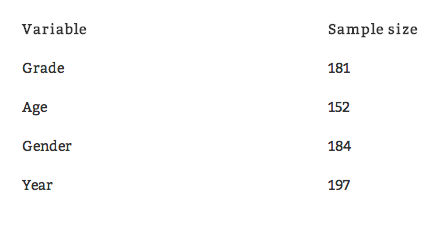 Furthermore, Ray does not discuss how he recruited his participants or how he obtained their test scores and demographic data. Based on the methodology he used in later studies, it is likely he recruited his participants through state or local homeschooling organizations rather than by random sampling. In this case, his data would be subject to self-selection bias. However, we do not know because he does not tell us. Not all of the standardized tests used by participants in the study contained sections on science and social studies, so Ray’s sample size for those subjects was even smaller—102 for science and 78 for social studies.[/expand]

Ray’s study is available for purchase on the NHERI website for $4. It is also available here. In one page of analysis, the findings Ray discusses are as follows:

As Ray does not conduct a full analysis of his data or provide a full set of tables, it is not possible to determine very much more. However, from the data he provides, it is also possible to deduce the following:

Methodological problems with Ray’s (1994) study include failing to discuss crucial details, failing to correct for background factors, using a sample size which is too small, and drawing a sample that is not representative of the population.

As mentioned above, Ray does not discuss how he recruited his participants, how he gathered their demographic information, how he dealt with the many incomplete demographic profiles he received, under what circumstances the participants took the standardized tests, and what statistical analyses Ray conducted. (It is standard practice to report the p-values for statistical tests, which he claims to have conducted, but he does not do so.)

Without this information, it is impossible to determine whether Ray’s sample was truly random or was exposed to selection bias; whether homeschooled students were administered the test under controlled conditions; whether Ray double-counted students who took tests in multiple years; and whether his statistical tests were valid.

This lack of crucial detail is a major reason why this study could not have been published as-is in a peer-reviewed journal.

2) No correction for background factors

Numerous studies have shown that race/ethnicity, socioeconomic class, parent education level, parental marital status, religion, and many other background factors influence children’s academic success. Ray does not collect, let alone analyze, data on his participants with respect to these demographic variables. It is thus impossible to know if his participants are comparable to the average public schooler. If Ray’s sample was more white, better educated, and of a higher socioeconomic class than the national average (as in much of his other research), it would be completely expected that they would score higher than the national average. It would not, however, indicate that homeschooling under Virginia’s religious exemption was the cause of those high scores.

In the 1994-1995 school year (the earliest year for which these statistics are available), there were 7,856 students in Virginia being homeschooled under the homeschool statute compared with 1,767 students being homeschooled under the religious exemption. The 156 students whose scores on the “basic battery” of tests (reading, math, and language) were analyzed comprised 9% of all homeschoolers operating under the religious exemption. If the study were based on a random sample which was demographically balanced, this would be an acceptable sample size. However, since homeschoolers who take standardized tests are only a small portion of the entire homeschooling population (perhaps only 2-3%), and because testing is entirely voluntary for those homeschooled under Virginia’s religious exemption, it is likely that this 9% of religiously exempt homeschoolers includes many of the highest academic achievers in the state, and unlikely that it includes students who are at the greatest risk for educational neglect. We thus know very little about the academic performance of the vast majority of religiously exempt students—91% of them—who did not participate in this study.

Furthermore, in the 2012-2013 school year (the most recent year for which statistics are available), there were a total of 29,886 homeschoolers operating under the homeschool statute in Virginia, compared with 6,429 operating under the religious exemption. If we assume the homeschooling population has stayed essentially the same in terms of demographics over the past 20 years (not necessarily a warranted assumption), Ray would need to sample 579 students today to get the same percentage of the state’s homeschoolers.

The children whose test scores were analyzed by Ray were not representative of the state’s religiously exempt homeschoolers, let alone the state’s public school children, in terms of age and geographic location.

Particularly for the middle and high school grades, Ray’s sample sizes were so small as to be essentially meaningless—Ray only had the reading and math scores of 15 participants in grades 9-12 and 29 participants in grades 6-8. In his analysis of reading and math scores by grade level, Ray was only able to use the scores of two 11th graders and one 12th grader. He obtained the test scores of only six 15-year-olds, one 16-year-old, and one 17-year-old. 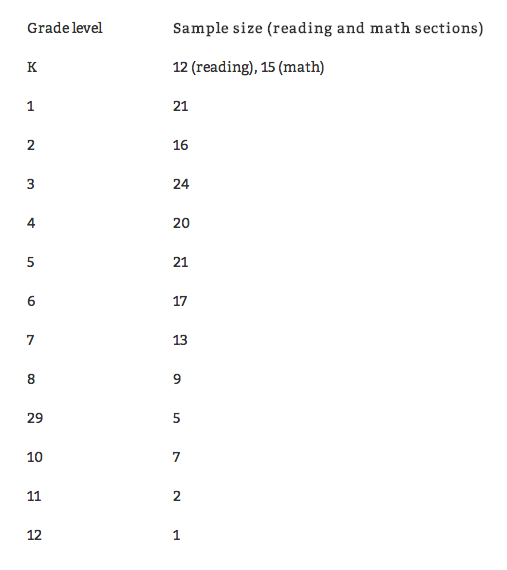 However, if we remove the outliers of Fairfax and Chesterfield Counties, the correlation essentially disappears (r = .16). This means that there is little relationship between the number of public schoolers and the number of religiously exempt homeschoolers in a district.

The districts with the highest ratio of religiously exempt homeschoolers to public schoolers are all rural counties which do not contain a major population center: Floyd County (7:100), Madison County (5:100), and Giles, Charlotte, Highland, and Warren Counties (4:100).

Ray’s 1994 study does not tell us very much. The 156 religiously exempt homeschool participants who took the “basic battery” of standardized tests scored, on average, around 33% higher than the national average of all public schoolers. However, these 156 students were not even representative of all Virginia religious exemptions—comprising only 9% of that population, they most likely were guilty of selection bias and contained far too few middle and high schoolers to achieve statistical reliability—let alone socioeconomically comparable to all public schoolers in the US, to whom Ray compared them.

We cannot tell how well religiously exempt homeschoolers in Virginia are doing academically in the present day from Ray’s 1994 study. This study tells us only that a small, highly selective group of elementary schoolers were doing well in 1994. We know nothing about how well the majority of religiously exempt homeschoolers were doing in 1994, and the population has undergone so many changes since then that Ray’s findings are no longer relevant.[/expand]

Bahr, Stephen J. 2001. “Social science research on family dissolution: What it shows and how it might be of interest to family law reformers.” Presentation at the conference, “The ALI Family Dissolution Principles: Blueprint to Strengthen or to Deconstruct American Families?”, J. Reuben Clark Law School, Brigham Young University, Provo, Utah, February 1, 2001. http://fact.on.ca/Info/divorce/bahr2001.pdf

Davis-Kean, Pamela E. 2005. “The influence of parent education and family income on child achievement: The indirect role of parental expectations and the home environment.” Journal of Family Psychology 19:2. 294-304. http://www.mikemcmahon.info/ParentEducationIncome.pdf