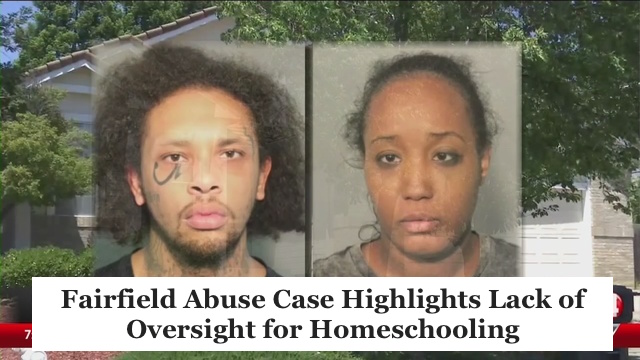 No Homeschool Oversight in California: Another Child Torture Case Is Discovered

This May, another homeschool torture case came to the attention of authorities, and has been covered by news outlets all over the country. This time, the alleged abuse took place in Fairfield, California, and occurred at the hands of parents Jonathan Allen, 29, and Ina Rogers, 31, who lived on the 2200 block of Fieldstone Court with their ten children, who range in age from six months to twelve years old.

Police came to the home after responding to a call from Ina Rogers about the twelve-year-old, who had run away. When police arrived at the home on Fieldstone Court, they saw squalid conditions throughout the house, and witnessed the other nine children huddled together in fear in the living room. Police were able to locate the missing child, (he was sleeping under a neighbor’s bushes), but were alarmed at the filthy environment the children were living in, and the way the children were acting. Human and animal feces littered the house, an image of which appears in the above photo, along with garbage and disarray. Police indicated that the children were scared, and spoke with speech impediments, a sign of neglect.

As a result of the horrific environment discovered in the house, Solano County Child Welfare Services took the ten children into custody, and the parents were arrested. During the investigation, the children revealed to law enforcement that they had been subject to years of torture. The children were also homeschooled, but it does not seem as if they really were ever educated.

Prosecutors involved in the case allege that the children were shot with a BB gun, and waterboarded, among other things. From Time magazine:

“On a continuous basis the children were getting punched, strangled, bitten, shot with weapons such as crossbows and bb guns, hit with weapons such as sticks and bats, subjected to ‘waterboarding’ and having scalding water poured on them,” Solano County Deputy District Attorney Veronica Juarez wrote in the bail request.

Ina Rogers was charged with nine counts of felony child abuse and one count of child neglect pertaining to all ten children. Jonathan Allen was charged with nine counts of felony child abuse and seven counts of felony torture, which was later amended to twenty felony counts including four felonies for a lewd and lascivious act on a child under 14. It is not unusual to see child sexual abuse in such severe cases. Both Ina and Jonathan deny the charges and insist that they are good parents. Their friends even started a GoFundMe internet fundraising page to raise money for a lawyer to defend the couple, stating that they were unfairly targeted (the page has since been taken down). The children’s grandmother, however, has spoken out against the parents, saying that Jonathan was unrelentingly abusive and a Satanist. In the past, she reported the parents to child welfare services, although nothing came of it. Photographs of Jonathan’s “meditation room” reveal what appears to possibly be a Satanic altar. Police said that the children were abused for “sadistic reasons”, but did not elaborate. As we often see in these cases, ideology and religion can be a component of the abuse.

Ina told reporters that she homeschooled her children, but the home in Fairfield had never been registered with the state as a homeschool. Previous California residences where the family lived were also not registered as homeschools. Even if they had registered the school, it would not have been subject to oversight by the state of California, which has extremely lax homeschool regulations, and there would be no state assessments which could have lead to the abuse being discovered.

These lax regulations are evident with another recent California homeschool-torture case, one which I have touched briefly upon in previous blogs- the thirteen Turpin children, who were found shackled to furniture in their Perris, California home on January 14th, 2018, by authorities, after a seventeen-year-old member of the family escaped and alerted police. The father of the family, David Turpin, had registered the family’s various homes a few different times as homeschools with the state of California. However, no one had ever checked in on the children to make sure that they were actually being educated, because California, like many U.S. states, does not require it.

The Turpin children endured years of torture and starvation, which caused them to have stunted growth due to malnourishment. Authorities reported that the younger children were unaware of what police were, and had never heard of medication. The children were not taken to doctors or dentists, and did not have much experience outside of the home, having been subject to severe isolation. Neighbors said the children were pale, skittish, and rarely seen outdoors. They were so malnourished that police initially thought the seventeen-year-old child was ten, and other adult children also appeared to be much younger than they were. The children of David and Louise Turpin ranged in age from two to twenty-nine, with seven of them being over the age of eighteen. Police did not realize this at first, due to the stunted growth of the adult children, which made them appear to be minors. This type of undernourishment can lead to many different health problems and disabilities.

The Turpin family were religious Pentecostals and Quiverfull, adhering to the large-family, no birth control, strict gender binary, traditional gender role lifestyle and ideology which I have written about in this blog before. A part of this ideology involves homeschooling, and often it means eschewing modern medicine. Not everyone involved in this movement is abusive.

Although David told the state that the children were in a full-time homeschool, incredibly lax regulations and zero oversight allowed he and Louise to severally torture and deprive their children for many years. The state does not require that homeschooled children see medical professionals to be checked for things like hearing loss and general health, nor does the state require that children ever be checked on by a mandatory reporter. There are no processes in place in California to assess educational progress made by homeschooled children, there are no tests children are required to pass.

Unlike Jonathan Allen and Ina Rogers, David and Louise Turpin told the state that they were educating their children, but in each situation, no one checked on the children, registered or not. It did not make any difference that the Turpins were registered and the Allen-Rogers home was unregistered; the same things occurred in each home: isolation, starvation, severe neglect and physical abuse, filthy environments, sexual abuse, and oppressive religious ideology.

The Role of Disability Rights

Both of these examples highlight how disabilities can develop when children are severally neglected and not educated. It is unclear if any of the younger children or the adult children in either case were disabled prior to the abuse, but disabilities have either already occurred, or will likely occur, in each family as a result of the abuse. Neglect and abuse can lead to learning disabilities, intellectual disabilities, speech and language delay, post-traumatic stress disorder, and many other disabilities. Neglect and abuse in childhood can cause emotional problems, physical problems, substance abuse, eating disorders, psychiatric disabilities, and leave a person vulnerable to future victimization.

In previous blogs, readers learned about abuse of children who already had disabilities. In this post, we have read how abuse that is covered up in a homeschool can also cause disabilities. This is another example of how regulations around homeschool is a disability issue. As the children in these cases developed these disabilities from the mistreatment and environment, the disabilities were not addressed with education or accommodations, either, leading to a further level of suffering and vulnerability.

If children do not learn to communicate and have delayed speech and language, and are not taught any alternative forms of communication such as through technology or using sign language, it leaves those children limited in their ability to communicate the abuse that is happening to anyone outside the home. It causes them to be even more dependent and reliant on the abuser. It is the same thing with being in a situation that causes developmental or intellectual delays from neglect and abuse, or psychiatric and emotional disabilities. The parents are using the disabilities to further isolate, deprive, and victimize the children.

“The solution is relatively easy: Force contact with mandatory reporters. States could require annual assessments by a certified teacher and annual doctor’s visits, creating at least two opportunities for a trained professional to recognize abuse.

Abuse in homeschool settings is all too common, even if it doesn’t always make international headlines. For families like the Turpins, mandatory reporter contact could mean the difference between death and rescue.”

Coleman is the director of the Coalition for Responsible Home Education.   Brightbill is the Coalition’s legislative policy analyst. The CRHE also runs the site Homeschooling’s Invisible Children.

A component of requiring children see a doctor would be the discovery and accommodation of disabilities. Law and policy need to go even further to ensure that American Disability Rights law covers children in homeschools. The Americans with Disabilities Act (ADA) is meant to cover anyone in the country who has a disability. This means that if someone is disabled, they have a right to disability accommodations and access, and they have civil rights around discrimination and mistreatment. Being in a homeschool does not, and should not, mean that a person is exempt from these rights. However, the Homeschool Legal Defense Association and their supporters have routinely blocked legislation that would regulate homeschools and protect disabled children, including the ratification of the United Nations Convention on the Rights of Persons with Disabilities  (CRPD).

The CRPD has been ratified in over 180 countries, meaning that this international convention has become part of that country’s domestic law. It is the most comprehensive and inclusive disability law ever written. The U.S., due to the conservative homeschool lobby, has routinely blocked this legislation, although Presidents George H.W. Bush and Barack Obama were in favor of it.

Clearly, a lack of homeschool regulations in the U.S. is causing serious problems, and many states have almost no regulations at all. Unchecked homeschools can be a cover for the most serious and heinous of crimes against children, and also cause disabled children to not have disability access, accommodations or therapies, which is another form of neglect and abuse. Often these two issues are concurrent-: torture and neglect intersect with disability in myriad ways.

It is interesting to note this juxtaposition between human rights, civil rights, and homeschool. We need to extend human rights and civil rights into homeschools and enforce mandatory reporting to try and eliminate child torture cases altogether, and to ensure that every child has disability rights protection.

← Report Indicates a Third of Children Removed From School to Be Homeschooled were Involved in Prior DCF Abuse/Neglect Cases
Exploitation of Marginalized Identities, Abuse and Torture: The Hart Children →