Erica Parsons: The Hallmarks of a Homeschool Child Torture Case

The story of Erica Parsons, the little North Carolina girl who was homeschooled, tortured and then missing for years, may seem like it has come to a close today as charges were finally brought against her adoptive parents for her 2011 murder. However, there is much to learn from the case, and Erica’s memory must continue to live on, especially as we near Disability Day of Mourning on March 1st, a day to remember disabled people who were killed by parents and caretakers.

Erica Parsons’ body has now been laid to rest in China Grove, North Carolina. Her remains were found by law enforcement in 2016. They were led to the site of her shallow grave by her adoptive father, Sandy Parsons, who, along with his wife Casey, disposed of the child’s body on his mother’s farm after the two of them murdered her when she was around 11 or 12 years old. 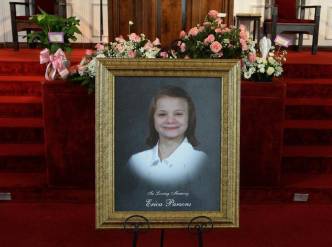 Sandy and Casey, prior to these latest charges, had already been serving prison time for fraud, which they were both charged with for stealing disability and state money meant for Erica, even after she was deceased. Law enforcement and the judge in their fraud case have long suspected that they were responsible for Erica’s murder, although both Sandy and Casey Parsons went on TV many times to claim their innocence, even appearing on Dr. Phil.

More details about Erica’s story can be read here.

Autopsy reports indicate that after years of abuse, the little girl died from homicidal violence, and her body was dismembered and then buried in a shallow grave on Sandy’s mother’s rural property. Erica Parson’s life shows all the signs of child torture, and a medical examiner stated that was indeed what she had gone through.

Torture is prolonged, severe abuse, and often includes starvation, isolation, and deprivation, among other abusive behaviors. Erica was starved and malnourished, had stunted growth, and her body showed many signs of severe abuse which had occurred over the years. The abuse was so bad that it was difficult for the coroner to say what finally killed her. It could have been strangulation, suffocation, or blunt force trauma. The final report indicated that homicidal violence of some kind is what ended her life. With a case like this, the abuse is so severe and ongoing that it is not difficult to understand how any number of abusive acts could have been the one that led to her death. The fact that Erica’s body was undiscovered for almost six years after her passing also made the autopsy difficult.

Many aspects of Erica’s case are common among child torture cases. Torture and severe abuse often is carried out by the mother . From Time Magazine:

Elizabeth Skowron, a professor of counseling psychology and a research scientist at the University of Oregon’s Prevention Science Institute, says that in her group’s work, mothers are very often both the perpetrators and initiators of abuse. The NCANDS [National Child Abuse and Neglect Data System] data backs that up, with 70% of victims mistreated by the mother, the large majority of those times without the participation of the father.

In Erica’s case, both parents participated in the abuse, but it was masterminded and especially cruel at the hands of her adoptive mother. Mothers, stepmothers and adoptive mothers make up large numbers of those found to have been torturing children. According to the journal article Child Torture as a Form of Child Abuse :

-Typically both adult caregivers are involved in the torture to some
extent
-Women figure much more prominently as perpetrators of torture than in other forms of physical abuse
-Siblings are aware of and may be coerced to participate in the abuse, and also may be abused to a lesser degree

In Erica’s case, both adults tortured her, with the mother figure being dominant. Casey Parsons also encouraged the other children in the home to gang up on and abuse Erica, even making her adoptive brother Jamie break her arm, as he testified to during the fraud trial.

Several children came into the torturing households through informal family arrangements. We observed that 79 % of the primary abusers were not the child’s first degree relative; they included such caregivers as boyfriends, girlfriends, aunts, uncles, grandparents, adoptive parents, and stepparents.

Erica was placed in the Parsons home through an adoption which occurred between her biological mother, Carolyn, with Sandy and Casey, as Carolyn was unable to care for Erica, and Erica’s father was a severe addict who was always in trouble with the law. Sandy Parsons was Carolyn’s former brother in law. Casey Parsons reportedly was not enthused about adopting Erica and took out her anger at Carolyn on the little girl.

Another aspect of Erica’s situation which needs further research in these specific types of cases is the fact that she was disabled. Readers of this blog know that disabled children are at greater risk of being abused. More research needs to be done on numbers of disabled children who are tortured, because there are differences in the psychology and manifestations behind torture than there are with other child abuse cases.

Erica had intellectual disability, and people with intellectual disability are at high risk of being victimized. Erica also had hearing loss, and deaf and hard of hearing people are also at a much higher risk of being victimized. Whether that victimization specifically turns into these types of torture cases needs to be better understood. However, according to the Coalition for Responsible Home Education (CRHE)’s database of homeschool child torture cases, Homeschooling’s Invisible Children, many victims were disabled.

Homeschool plays a vital part in child torture, since it allows the abuse to be covered and continue to escalate to extreme levels when the child is not around other adults who may figure out what is happening in their home, such as a teacher, principal or counselor. In one of California’s worst child abuse cases, outlined in the book A Child Called It, the autobiography of David Pelzer, David’s abuse at the hands of his mother was discovered only because he was in public school. That was in the early 1970s. Since that time, teachers and the public in general has become more intuned to child abuse and there has been better education about it. Although David was not disabled, he became so after the abuse.

Erica’s story is extremely tragic, especially since no educational authorities ever checked up on her due to lax homeschool regulations. If they had, her story may have turned out more like David Pelzer’s, who was placed in a caring foster home and protected by authorities after his teachers, school nurse, and princepal figured out that something was seriously wrong. Like Erica, young David was starved, beaten and subjected to cruel torture at the hands of his mother for several years. He knew it would only be a matter of time before she killed him. The end results of torture cases is often homicide.

A perpetrator in a case like David’s or Erica’s will do whatever they can to continue the abuse, since they are gratified in some way by it. They do not have an intention of stopping, and will go to extremes to cover the abuse. In a torture case, that often means keeping the child out of school, and that is where homeschool comes in. Homeschool can provide a long-term cover for pepetrators involved in the most serious of child abuse crimes. Abusers know this, and are not above defrauding the state and everyone else to continue the torture.

This Disability Day of Mourning, let’s take time to remember Erica and every other disabled abuse victim who was murdered by a parent or caretaker and take concrete, evidence-based steps to end it, including more research in some much needed areas that sit in the intersections of disability and homicide.