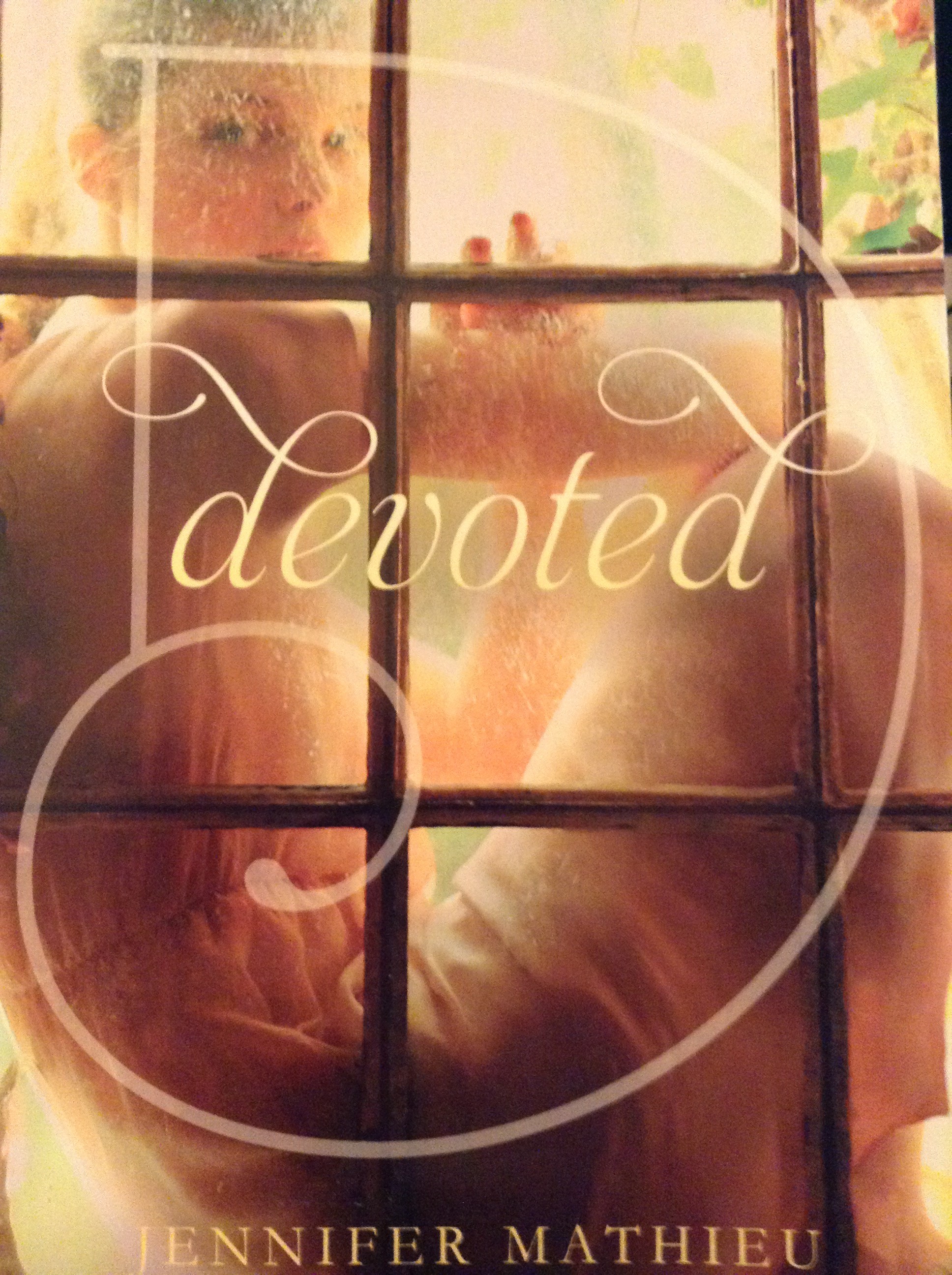 In her novel, Devoted, Jennifer Mathieu enters the world of Rachel, a dutiful homeschooled daughter and sister to five younger siblings. As Rachel’s mother struggles through depression, Rachel cares for and teaches her younger siblings, escapes into forbidden books, and begins to wonder about the world outside. She reads the blog of Lauren, an older girl who left their community, and Rachel begins to question whether she really wants the path that’s set out for her: marriage, childbirth, and an end to her education. Mathieu deftly paints a very sensitive — and very realistic — portrait of a young girl whose education has effectively ended but who has so much more that she wants to learn. CRHE’s Board Member Alisa Harris spoke with Jennifer Mathieu about her research, what she learned from talking with homeschool alumni, and how her own experience as an educator played into the novel. Note: this interview has been edited for clarity and brevity.

Alisa Harris: Did you have any connection to the homeschool community before you started researching? How much did you know?

Jennifer Mathieu: When I was growing up, I went to Catholic school my whole life. My family was a part of our community pool and there was a church community near us that got very involved. The pastor of the church was a college swimmer and became the coach of our community swim team. He brought his whole congregation with him. All of these children homeschooled. I had never known any homeschoolers in my life so every summer I would connect with these homeschooled kids and we would have fun in the summer and I would never see them during the school year. I remember I was always asking them why they were homeschooled. They would explain to me that it was part of their faith, that the Bible told them education was the responsibility of the parent. As a little girl, I remember feeling sorry for them because I felt like they lived for the summer. I felt like the summer was their time to have connections with a ton of other kids. That was my introduction and that’s where my curiosity began.

AH: What were your perceptions before you started your research and how did those perceptions change? What was the most surprising thing that you learned?

JM: I think something that I intuitively knew or sensed ended up being affirmed by my research. I thought that one of the challenges of being homeschooled, for some children, would be when they had outpaced whatever curriculum they were given. What would happen when they had a hunger to learn more and their parents couldn’t teach them? I remember doing science labs and chemistry labs that were super complicated, and we needed a chemistry lab. I remember thinking How would you do that? How would you complete certain things like that as homeschooler? That was affirmed for me in my research.

Even though it seems so obvious to me now, I had never thought about what a homeschooler would do if they were in an abusive situation. As a teacher, I have to report if a kid tells me anything. Lauren is being physically abused in the book. Who is she supposed to tell? I never thought about the fact that if your only world is this insular homeschool community, if you are being abused who do you have to tell?

AH: You did interviews and talked in-depth with homeschool students and alumni to research the book. Did you look for other types of data too?

JM: Something that I didn’t realize was that the laws were relaxed in the 1980s. I’m a former reporter, I’ve been a teacher for 10 years so the whole topic fascinates me on multiple levels. I was surprised at how easy it is to homeschool in some states. When I taught in public school I noticed there would be kids who would suddenly disappear and we would hear they’re being homeschooled. I would think, They’re getting homeschooled? I know that family and I’m a little bit concerned. Sometimes it was used as an excuse not to have to send the kid to school and that terrified me as an educator.

AH: In addition to writing novels, you’re an educator who teaches English to middle and high schoolers. How did that experience and profession shape your research and the questions you asked as you got to know homeschooled students?

JM: As an educator, what I brought to it was the experience of getting to see a child become excited about learning. I’ve taught students like Rachel who are just intuitively curious. In my mind, Rachel’s an exceptionally bright child. She had to be that smart to want to be able to learn as much as she wanted to learn. I felt that was her avenue out because she became so curious–that hunger to know was what helped her leave. I’ve taught children like that who are exceptionally and incredibly bright and there is such a hunger to learn. I watch students like that get accepted to Yale and University of Texas and they’re just going to flourish and I can’t wait. I say, “Please stay in touch — I want to find out what you do for the world.” As an educator I thought what would it be like if one of these blooming flowers were trapped and wasn’t allowed to bloom? She wants to blossom, she wants to learn.

I used to read obsessively. That was just one thing that I did and I remember thinking back on that when I was writing Rachel’s character. I thought What if that’s all that she had? As an educator I imagined my brightest stars and put them in this environment where they wouldn’t be allowed to shine, and that’s kind of how I wrote Rachel.

AH: The educational picture in the novel is complicated. On the one hand, Rachel is clearly a smart and motivated student who is gifted in math and computers. On the other hand, she doesn’t seem to receive very much instruction for her own education and spends most of her school time teaching her younger siblings. How did you decide to deal with Rachel’s education? Were you surprised at the extent to which some homeschoolers are basically self-taught?

JM: I was surprised to learn how much responsibility the older girls were given, especially in terms of instructing the little ones. There was an anecdote I read about a man, a father talking about how his 9-year-old daughter didn’t know how to read. He acknowledged that would make people uncomfortable but she was learning everything she needed to learn to be a wife and mother. I remember reading it and my blood just ran cold. I was so shocked.

I am a licensed educator in the state of TX. My teaching certificate is only for English and I could maybe teach my son up to about third or fourth grade level math. That was one thing that I learned as I started reading more — you can buy these curriculums off the internet, but you still need an instructor who can explain it. I don’t think I really realized how much the older girls were tasked with helping the younger ones, even though I would kind of see that in 19 Kids and Counting.

JM: I think that Lauren’s family is portrayed more one-dimensionally and more evil, obviously more abusive. I did not want Rachel’s parents to be one-dimensional. So many homeschoolers I talked to told me about how they loved their parents. Their parents maybe had dysfunctional childhoods of their own and they thought they were giving their kids what they didn’t have. I didn’t want to make Rachel’s parents overtly abusive because that would make it obvious for Rachel to leave. But I had read stories and heard anecdotes about homeschool children who had been abused. I wanted to work that into the narrative and show this more extreme, overt abuse that has gone on. That’s why Lauren’s story is in there. I was trying to show the continuum of the behavior that can go on in these families.

AH: Have you had any reaction from the homeschooling community, alumni or current? How has it been?

JM: The reaction I’ve received has been very positive. It made me feel good because they said, “You told our story in a way that was not exploitative but was real.” I have had a couple of people say, “It was triggering for me to read it. I had to put it down. I was too emotional at parts.” I don’t want to make people cry, but if I am creating that reaction then it’s authentic. My hope is that people will read Devoted and if people are from that world, they will read the book and hopefully find some validation, perhaps find some encouragement to look forward to enhancing their education through other means.