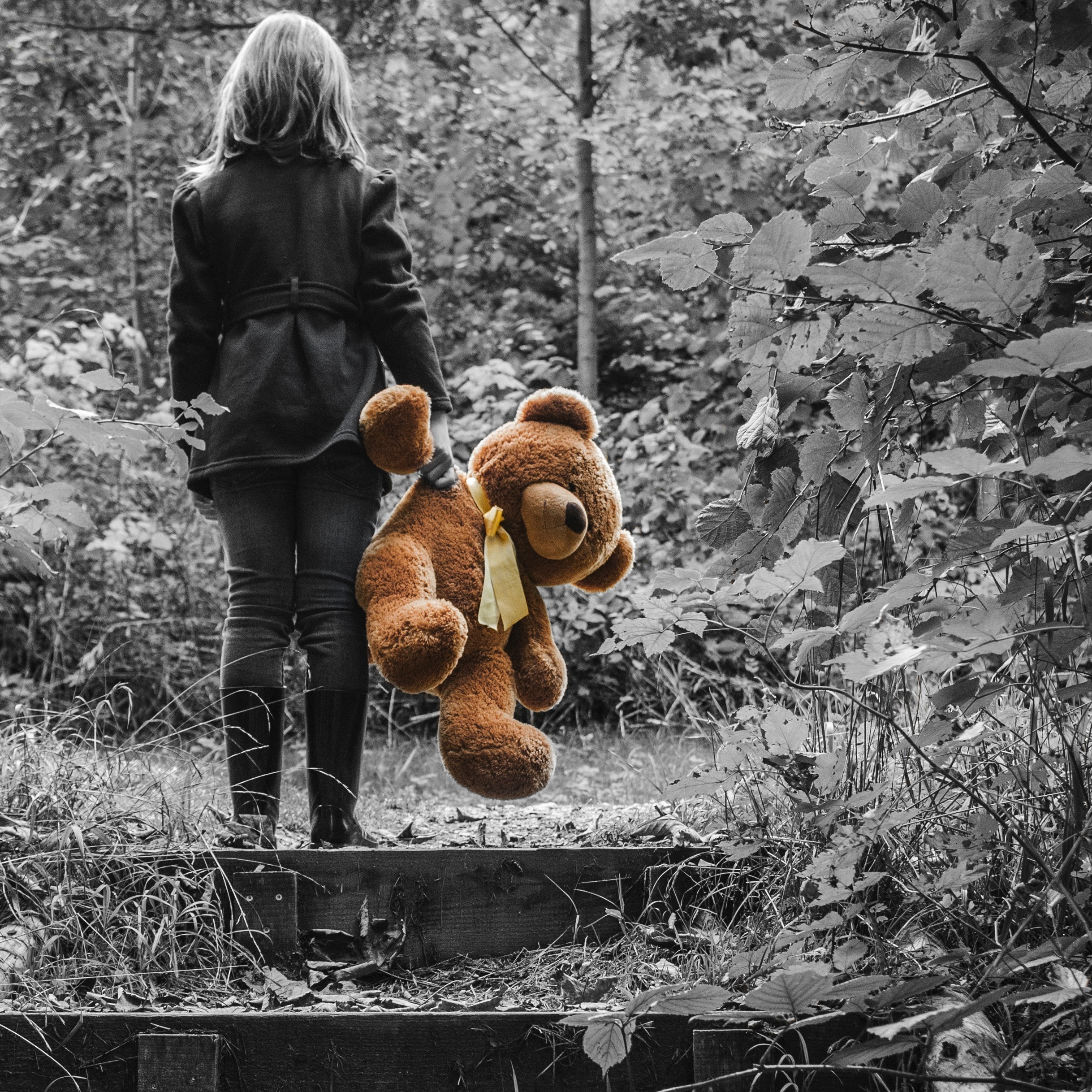 I am the second child, oldest daughter in a family that eventually grew to nine children, with each child spaced about two years apart. My parents read Michael Pearl and Above Rubies. They attended Bill Gothard’s ATIA (Advanced Training Institute of America) seminars and received HSLDA (Home School Legal Defense Association) materials. They attended a local homeschool group for a while, but couldn’t get along with the other parents. They jumped from church to church, and found support in a Mennonite colony located about two hours away from our home.

My parents were abusive. They spanked us brutally for failing to respond to their orders with instant obedience and taught us that if we had rebellious thoughts about them god would send ravens to pick our eyes out. Neither of my parents worked. My mom was a “stay at home mom” (and tried to homeschool) and my dad dabbled in various failed businesses but couldn’t hold down a pay-rolled job because of the interpersonal aspects—he couldn’t handle having a boss or being a peer with (or god forbid a subordinate of!) women in the workforce. They yelled at us, and they neglected our nutritional needs. They fed us rice and oatmeal because without even one income they couldn’t afford to feed us, and they appealed to other church families to give us hand me down clothing, including shoes and underwear, so they would literally never have to buy us anything. They spent approximately $200 on clothing for us in the approximately 20 years between the birth of my oldest brother and when I left at age 17.

My parents used material from HSLDA and ATIA to talk to us about keeping family business private, because otherwise social workers would come and ruin our lives and it would be all our fault for not keeping our mouths shut.

When I was about 8 years old, a relative made a report to the Children’s Aid Society (Canada’s equivalent of Child Protective Services) after observing our physical abuse and neglect. There would have been about six of us children at the time. Two social workers for CAS came out to our house. Their names were Cathy and Kathleen, which at eight I thought was funny because Kathy could be short for Kathleen. Cathy was training Kathleen. They came to our house and talked to us. It’s hard for me to remember the order of things because I was so so young, but there must have been an initial visit that prompted them to open a file and something to justify keeping it open. It is my understanding that my parents voluntarily agreed to a short series of supervision meetings with the social workers in order to avoid raising suspicions.

Cathy and Kathleen were very kind ladies, nothing like what we had been trained to fear by our parents. They smiled at us and learned our names (no small feat when there are six kids running around), and they took the time to listen to us. They remembered my doll’s name. My parents carefully prepped us with the right answers before every visit, and we were given to understand how serious our punishment would be if we let any family business slip. For example, we were told what to tell them about the food we ate, which was not exactly accurate. I was not allowed to tell them what we were spanked for and whether an object was used (“say no to that!”). My parents took their collection of rods and stored them in the woods. They made us do a bunch of workbooks so they would be able to show the social workers that we were doing schoolwork. The social workers were not there specifically because we were homeschooled, though they were concerned by my siblings’ literacy problems. Mainly they were worried about our profound (and likely painfully obvious) isolation from others, which I now understand to stem partially from concern about social development and partially from concern that isolation would prevent signs of abuse from being noticed and reported properly.

In the end, enough concerns were noted, even with the careful prepping my parents did in advance of the meetings, that my siblings and I were taken to the police station by the social workers and two police officers and asked to give taped statements to the police. The interviews were difficult because we had been taught to tell the truth, but also carefully taught not to talk about family business including the abuse, so it was difficult to avoid lying and to also avoid telling the truth. As I recall, based on the tapes and the notes by the social workers, my parents were approached by the social workers with a deal that they could go to court and CAS would only ask for a supervision order with the conditions that my parents had to stop the physical abuse and comply with very basic homeschooling requirements. My parents declined, and the case was referred to family court. The intent in family court was to establish a long term supervision order with those conditions, or if that failed due to my parents refusing to accept the conditions of the supervision order, to obtain an apprehension order which would mean we would be taken into foster care.

I remember that my father said that this was what HSLDA was for. He spent quite a bit of time on the phone, and from my understanding, someone from HSLDA made phone calls for my parents to help them find a lawyer who would take the case for free. I also remember him saying he was going to use HSLDA to get Cathy and Kathleen fired.

But at this point the case was out of the hands of the social workers. My parents continued to blame the entire fiasco on the social workers, but in reality the social workers knew that they were dealing with controlling parents and hurting kids, and passed the case to their supervisor and from there it went to the court, which is exactly what is meant to happen to protect children who are being abused.

Following the directions of our parents and their newly-obtained lawyer, my siblings and I declared in family court that we wouldn’t testify against our parents. As a result, I understood that the case was thrown out of family court because the judge was unwilling to enforce supervision if we children would not stand behind our statements that indicated abuse. CAS decided to try prosecuting criminally for the physical abuse. If this was successful it would have resulted in my siblings and I being apprehended and taken into foster care. The case was referred to the criminal court across the hall and I was called as a witness and ordered to testify to the truth, regardless of my relationship with my father. This meant that he sat a few feet away from me, staring at me while I was asked to answer questions about his parenting, which was being treated as criminal activity. If I remember correctly, the result of the criminal case was a finding that my parents were not guilty of criminal activity but that they would need to accept long term supervision by CAS.

We were never out of the custody of our parents during the case, so when the case ended, my parents were advised to pack us up in the middle of the night and leave. I don’t know who told them they should do this. They took us to the nearby colony of Mennonites that had been supportive during the case. The Mennonites kept us in their homes for a few weeks, and then contacted Mennonites in Ontario and arranged to send us to them. My parents moved us halfway across the country, starting over in a new religious community that was quite willing to help hide my parents from CAS.

This is not how things are meant to happen. Abused children should not be put through two court systems and then spirited away in the middle of the night. Unfortunately, this is what can happen when organizations value protecting parents over protecting children and, as a result, actively defend abusive parents from justice.

I know that people’s experiences with social services can vary, but for me and my siblings, being in contact with social services gave us a small glimpse into what the world outside of our family was like. We had been taught to be afraid of social workers, but Cathy and Kathleen weren’t evil and they weren’t scary. They were there to help hurting kids and that is what they tried to do. Unfortunately, when religious organizations de facto assume that parents are doing a good job, the result can be a war between a system set up to protect parents and a system designed to help children and families. When this happens, the children will lose. It would be much better if homeschooling parents taught their children to be wise in trusting others rather than teaching them to fear everyone. Creating a fear of everyone instills poor self esteem and sets children up to be unable to trust others.

Please know that while social workers are not perfect, they do not head into homes to tear apart families. They gave my extremely neglectful and abusive family every opportunity to self-correct, and then they followed proper channels when that failed. Although it took another 10 years after moving to Ontario, with several unproductive investigations prompted by various reports, CAS did eventually stage a successful intervention. As a result of this intervention, my younger siblings were finally given the opportunity to pursue an education and to experience life without wilful neglect and poverty.